The Law of Three Stages [The Law of Human Progress]

A famous example of Comte’s quest for constant principles guiding society is his “law of the three stages.” According to Comte, all knowledge, the human intellect, and individual human beings go through three developmental stages.

In Comte’s view, each area of human knowledge goes through a series of various theoretical conditions. The three-stage law is used to describe this. This principle’s primary objective is to serve as the foundation for sociological thought.

According to Auguste Comte, the development of the individual mind preceded the evolution of the human mind. In other words, he maintains that just as each person grows from the stage of a devoted believer in infancy to a critical metaphysician who challenges the abstract conceptions of existence in adolescence to a natural philosopher in maturity, so have humans and their thought processes.

Comte believed that the “law of the three phases,” one of the most fundamental principles of human organization, was strongly inspired by the philosophical ideas of Turgot, Condorcet, and Saint-Simon.

Theological-military, metaphysical-judicial, & scientific-industrial phases are what he referred to as “positivistic.” A distinct “spirit characterizes each stage,” a concept that originated with Montesquieu and was developed by Condorcet and by chronological or structural circumstances. The theological-military stage, centered on slavery and the military, is therefore dominated by concepts that allude to the supernatural. The notions that imply the underlying components of phenomena and complex political and legal structures are represented by the metaphysical-judicial stage, which comes after the theological and marks a transition to the Scientific. Finally, the “positive philosophy of science” and industrial forms of social organization rule the scientific-industrial stage.

Auguste Comte believed that all civilizations experience change. However, there is a point at which society experiences social stability. In such a society, intellectual concord and social stability exist in all spheres. Society is now in its organic phase. But the old customs and institutions start to change as the crucial era arrives. There is no longer intellectual concord, and there is unrest in society. According to Auguste Comte, this was a pivotal time for French society. According to him, every civilization has a period of anarchy that lasts for at least a few generations, and the longer it lasts, the more thoroughly that society is rebuilt.

When it comes to political domination in the history of the human race, priests and military men had sway over the theological stage of human thinking. Churchmen and lawyers dominated the metaphysical period, which spanned the Middle Ages and the Renaissance. Finally, industrial administrators and scientific and moral authorities would rule the positive stage, which was commencing. 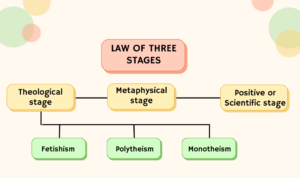 The three phases of human thought evolution are