The “laws of succession,” or the dynamics of changing social systems through time, are the subject of the study of social dynamics. Comte developed the specifics of his rule of the three stages, which states that thought systems and the social structural arrangements that correspond to them go through three stages: the theological, the metaphysical, and the positivistic. 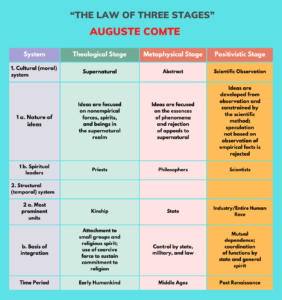 Comte’s perspective on several topics, including the rules of succession, is conveyed in this table. 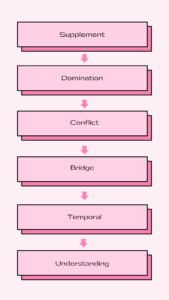 First, each step creates the prerequisites for the next. For instance, the development of political, legal, and military systems and the modern division of labor could not have been viable without attempts to clarify references to the supernatural. Similarly, efforts to develop more sophisticated interpretations were only feasible with kinship systems.

Second, new concepts and structural configurations are built upon the old over the process of development. For instance, allusions to the supernatural or kinship do not go away.  New cultural and social structures initially supplement them, and then they take over.

Third, there is anarchy and chaos as one stage changes into the next because features of the previous stage clash with those of the rising stage.

Fourth, the metaphysical stage is a bridging phase between positivistic philosophy and theological speculation.

Fifth, conceivable social arrangements are limited by the nature of cultural concepts, which also dictates the form of social structural (temporal) arrangements.

Sixth, the introduction of the positivistic stage made it possible to comprehend how society functions, enabling society to be manipulated in line with the rules of statics and dynamics.