The Sociological Association of Ukraine is a non-profit organization that debuted in 1990 for sociologists in Ukraine.

The Sociological Association of Ukraine is a non-profit organization that brings national and international sociologists together. The organization served as the Ukrainian division of the Soviet Sociological Association from 1968 to 1990. At the Constituent Congress in 1990, SAU took on its current form. SAU’s board got elected after restructuring at the sixth Congress of Ukrainian Sociologists, which was held in April 2007. Graduates in sociology were chosen to serve on the SAU board. SAU has a regional branch in most regions of Ukraine. 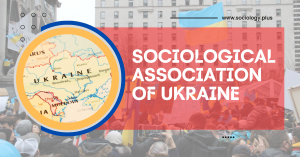 SAU periodically organizes international and national scientific conferences. SAU has been a collective member of the International Sociological Association since 1993.

The Ukrainian Institute for Social Research hosts the All-Ukrainian School of Young Sociologists each year.

The tenth International Scientific and Practical Conference is organized in 2022 by SAU in collaboration with the National Technical University of Ukraine, Ministry of Education and Science of Ukraine, Scientific society of students and postgraduates of the FSP, Kyiv branch of SAU, Business Risk Management Group of Warsaw-Poland, and YMCA Europe. The online conference theme is “From Weber to Wallerstein: historical sociology of states and world systems.”

The fourth Congress of the Sociological Association of Ukraine is themed “Transformation of social institutions in the information society” and is organized by SAU in 2021 with funding support from ISA.

Code of Professional Ethics for Sociologists

The Fifth Congress of the SAU in Kyiv, Ukraine, approved the Code of Professional Ethics for Sociologists in 2004.

The Code of Professional Ethics lays forth the principles and ethical code of sociologists’ professional duty and conduct.

One of the top research firms in Ukraine, Kyiv International Institute of Sociology (commonly known as KIIS), provides its customers with a wide range of social research solutions. The National University of Kyiv-Mohyla Academy collaborates with the private Ukrainian enterprise KIIS. KIIS began as a research facility of SAU in 1990 and became a commercial company in 1992. In Ukraine, KIIS became a trailblazer in developing sociological research standards.

KIIS has collaborated with the following associations.