The Yugoslav Association for Philosophy and Sociology split in 1960 and the Serbian Sociological Society was thus formed.

The Yugoslav Association for Philosophy and Sociology split in 1960 into the philosophical and sociological sections. The new sociological Segment for Serbia convened an assembly in 1961 under the leadership of Mihailo Popovic. The society’s official name at the time was Serbian Sociological Society/Српског социолошког друштва. In the following decades, it endured name changes and structural modifications until returning to its original name in 2006.

Anyone with a degree in sociology who has published significant works in the discipline is eligible to join the SSD under Article 5 of the SSD Statute. Under the same criteria, sociologists from other nations may enroll in the Association. The Association welcomes membership from regional and collective sociological organizations. People who have excelled in the subject of sociology are given honorary memberships. A member of the Association may participate in organizational activities and election procedures per Article 8 of the SSD Statute.

SSD wants to utilize the Association’s activities for its members’ professional and academic development.

The Sociological Review started in Belgrade in 1938 and is the oldest professional publication in Balkan studies. It is published quarterly. It is an interdisciplinary journal with sociological thinking among its interests. Both English and Serbian versions of it are released in tandem. The production of publications and research projects involves researchers from various nations and Serbian areas. Serbian Sociological Society is the journal’s current publisher. 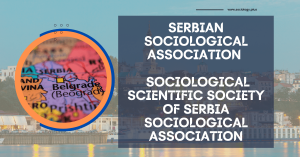 Mission and Vision of SSSS

The non-profit, non-governmental Sociological Scientific Society of Serbia’s objective is to aid in advancing sociology as a scientific field. The SSSS fosters and advances sociology-related local, national, and worldwide research, teaching, and professional activities through its activity programme. To address various social concerns, the goal of SSSS is to promote the practical application of sociological ideas. In particular, SSSS fosters the development of critical scientific thinking on society and the variables that affect social life by acting as a facilitator among sociologists.

Since 1959, the quarterly scientific publication Journal Sociologija has been disseminating theoretical and methodological research articles in social anthropology, social psychology, and applied sociology. The Institute for Sociological Research at the University of Belgrade and the Sociological Scientific Society of Serbia jointly publish it. A bilingual peer-review procedure precedes the publication of Sociologija in English, Serbian, or other foreign languages.