Hellenic Sociological Society debuted in the capital of Greece in 2007 to encourage scientific research in the discipline of sociology.

The HSS members are categorized into regular, corresponding, and assistant. The terms outlined in the HSS charter are followed for members’ registration and departure. Regular members elect themselves to the HSS’s administrative bodies, participate in General Assemblies, and possess the right to vote. Without the ability to vote, corresponding members may participate in HSS General Assemblies, and this privilege is not available to assistant members. Access to the Association Journal and the HSS conference proceedings is free for members of HSS.

Convening of the HSS General Assembly

Every two years in September, immediately after Panhellenic Conference, the HSS Administrative Board holds a General Assembly.

Agenda of the Ordinary General Assembly

The functions of ordinary general assembly include

Scientific studies of the Hellenic Sociological Society of Greece

The means of conducting scientific work are covered in Article 20 of the HSS statute. Scientific organizations are composed of members with varying levels of academic specialization and are organized around particular subject areas. The charter mandates the creation of a library for social sciences and humanities and the establishment of an institute for social research. 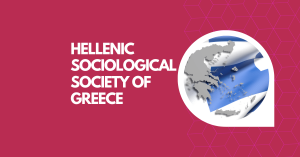 International outreach and collaborations of the Hellenic Sociological Society of Greece

Panteion University of Social and Political Science and Harokopio University hosted the thirteenth ESA Conference organized by HSS in Athens in August 2017.

HSS collaboration with institutions and organizations.