FES was formed as a private law legal entity in 2005, in accordance with the statute of the Ecuadorian Sociologists Federation.

Article 11 of the FES Constitution mandates that foreign businesses engaged in social development initiatives in Ecuador have to comprise one Ecuadorian sociologist who is licensed to practice their profession.

FES aims to improve Ecuadorian sociology and the field of sociology on a professional and scientific level. 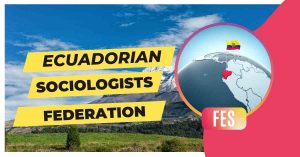 The governing body of FES

FES is made up of the following bodies:

The FES statute mentions about four types of membership.