DGS witnessed restructuring in 1946 after the second world war and has been developing as a formal association of nationwide sociologists since then.

With more than 3,400 members, the GSA is the national professional organization for sociologists in Germany. The Executive Board and specialized research sections handle the GSA’s administrative duties. A code of ethics has been established by the German Sociological Association, which provides guidelines for greater integrity within the sociological profession.

Anyone who has earned a scientific degree in sociology by coursework, research, the academic profession, or publication is eligible to join the DGS.

The German Sociological Association Congress is organized by the DGS once every two years. 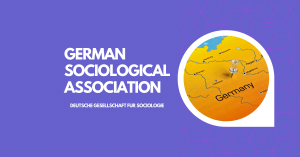 STUDIUM Initiative of DGS and VHD

The DGS and the Association of German Historians have created a website gateway named STUDIUM. This program gives recent high school graduates a chance to learn more about undergraduate sociology and history courses offered at German institutions.

Sociohub is the primary point of contact for literature search, communication, and sociology-specific information service.

Athenaum Verlag released the first issue of Soziologie Journal as a double edition in 1972–1973. Since 2008 Campus Verlag has published the journal. The journal follows open access policy as it believes it will help sociologists broaden their knowledge all over the globe.