The national academic association for sociologists in South Korea debuted in 1956 and is called the Korean Sociological Association.

History of the Korean Sociological Association

The mission of the Korean Sociological Association

The KSA’s mission is to promote sociological research and other promotional activities in conformance with the organization’s laws and approved statutory provisions to aid Korea’s social, economic, political, and cultural development. 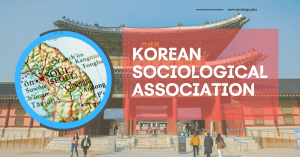 KSA organizes annual symposia, workshops, biennial national conferences, and seminars. With more than 900 members, KSA is one of the largest academic organizations in Korea. The three main membership types open to people and organizations that want to join KSA are student membership, collective membership, and ordinary membership.

At Seoul National University, the first research presentation took place in the seventh lecture hall in 1957.

In 1967, the Korean Agricultural Economics Association, the American Association for Agricultural Development, and the Asia Foundation worked to provide a special lecture on social research methodologies at Seoul National University. At this gathering, there were several social scientists and sociologists from Korea.

Korean Journal of Sociology is the official national-level journal of KSA that regularly publishes sociological articles and research findings. As a “core” publication, the publication is categorized and classified by CSA Illumina’s Sociological Abstracts. Both English and Korean versions of the journal are published regularly.